The “Casa Anfa” project was developed on the historic site of Casablanca’s former airport. The goal is to give Casablanca, the economic capital of the country, an international dimension.

Also known as “Camp Cazes”, this location was one of the oldest mail route stopovers. Built in the early twentieth century, the terminal quickly became a major point of service for airmail delivery between Europe to Africa. After being destroyed in the 1940s, the terminal was refurbished at the end of the Second World War. This historic site has hosted legendary planes such as the DC-3, the DC-4 or the Constellation of Air France as well as several historically famous pilots during their stopovers, such as, Henri Guillaumet, Antoine de Saint-Exupéry and Jean Mermoz.

With its 350 hectares,”Casa Anfa” is the new city center. “Casa Anfa” is firmly committed to sustainable development. The project devotes, not less than a third of the development to green spaces, including a 50 hectare park.

The “Casa Anfa” zone is an upscale project offering high-standard real estate and a luxorious living environment with: 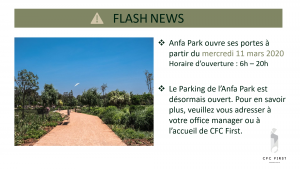 Anfa Park is located at the heart of the Casa Anfa project, a green lung in the project and for the city of Casablanca. Its program includes the development of a first 18 hectare section, sports routes, children’s play areas, an exhibition hall and a Skatepark. Kiosks and restaurants will enliven the public space. A green promenade has been designed around fresh and city gardens.